In the wake of President Obama’s meeting with the Dalai Lama, and this CNN poll indicating most Americans think Tibet should be independent, the Dalai Lama went on Larry King Live. In keeping with that show’s tradition of internet straw polling, Larry asked viewers the same question CNN asked Americans last week: Should Tibet be an independent country?

The results of this poll were quite different as the graph to the left, a screen-capture from Larry King’s site, shows. The reason for the discrepancy is quite simple: Anti-CNN forum members found the poll and rallied, racking up a fairly impressive vote count for “No”. Apparently the post also found its way onto Tianya, another more massive Chinese BBS, which helped.

As the voting went on, the numbers for “No” continued to climb as forum members commented on their progress in threads like this one. And while there was little doubt about whether Tibet should be an independent country, there was some debate about the usefulness of this tactic. Several commenters called it “boring”, but others expressed enthusiasm for this kind of democracy. One commenter wrote:

Come on, everybody, let’s jiong [囧, shock] them to death. If they dare to change the numbers then we’ll “Anti” them again.

Although no one on Anti-CNN seems particularly serious about ruining CNN online polls, one wonders if whether, especially given the already-sensitive state of relations between the Chinese and American internets after the Google hacks (and the subsequent accusations leveled at two fairly unremarkable Chinese schools, which former NYT writer Michael Anti called “the biggest joke I’ve heard so far this year”), this sort of tactic might only serve as fuel for Western fear-mongers who claim that Chinese people are going to “destroy” the internet. Lest you think such people don’t exist, check this out. Crazies will find their ammunition somewhere, of course, but one has to wonder what the Anti-CNN folks felt they gained from this.

Elsewhere in Tibet-related news, the Dalai Lama has again shown that he can run laps around the CPC elite when it comes to PR stunts. Hu Jintao may have a People’s Daily microblog (that has been closed already), but the Dalai Lama? He’s on Twitter.

That’s a great example of how Chinese internet censorship hurts its own cause in unexpected ways. As Twitter is blocked in China, Hu Jintao can’t very much set up an account to spread the government’s side of the story. So everything stays the same: the West gets to keep hearing from the Dalai Lama, the Chinese get to keep hearing from the government, and never the two shall meet…?

This post is a partial translation of a post at Woeser’s site with some commentary following the translation. Photos are also lifted from Woeser’s site. The post is essentially a news article about a Free Tibet concert that happened in Taiwan on the 11th. A short opinion piece follows the translation. 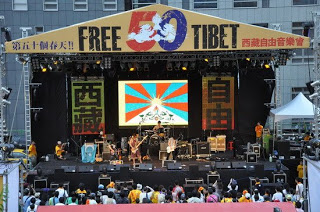 […] At the concert a video was shown of the leader of Tibet’s government-in-exile, the Dalai Lama, saying, “In the life of people, freedom, democracy, justice and the rule of law are [things] we all benefit from.” The entire audience erupted in thunderous applause. The Dalai Lama said, “The young people of Taiwan have a great responsibility for shaping the future of freedom, democracy, ideology, and material life in Taiwan.”

An excited mood prevailed at the concert. Singer Ba Nai said that his reason for participating in the concert was that he considered it a “personal favor” for [improving] the Tibet situation. Singer Da Zhi […], who uses songs to strive for freedom and democracy, said: “I sing to criticize idols, do you have the freedom to do this in China?” [Another singer said:] “As far as Taiwanese are concerned, we should do a bit more, whatever we can to help our brothers get freedom. Only when all of humanity is liberated can we finally liberate ourselves.” 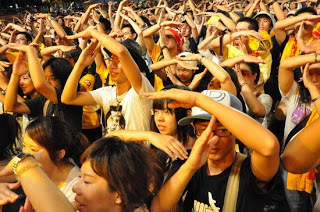 The sponsor of the event, Freddy, leading everyone in making a T with their arms, representing “T for Tibet”，and screamed “Free Tibet! Free Tibet!” in a massive chorus that echoed through the clouds. There was international media there recording the concert, so “Free Tibet” can be spread throughout the world.

The Honorable Dalai Lama gave a speech for the concert [not in person], saying: 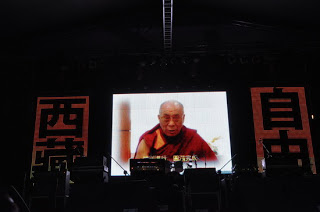 In the life of people, freedom, democracy, justice and the rule of law are [things] we all benefit from. They are also our natural rights; your hosting this concert is also to let many people know all of this. That is a great thing, and because of it I congratulate you again [beforehand] on the smooth running of your concert. And I express my gratitude.

Additionally, freedom and democracy are intimately connected with the ideology and the efforts of humanity. This concert reveals that the young people of Taiwan have a great responsibility for shaping the future of freedom, democracy, ideology, and material life in Taiwan. I believe that this new generation, having grown up in an environment of free information, will use their wisdom, explore the truth, pay attention to what is good, kind, and morally just, thus striving in their hearts for peace, freedom, and happiness.

Just, kind spirit and behavior can fill one’s own life with renewed satisfaction and can also benefit others, [so] I hope everyone makes great efforts [to accomplish this].

Personally, I am a Buddhist monk, so I pay special attention to mercy and compassion. I hold that mercy and compassion towards all things is the true realization of the foundation of justice, freedom, and democracy. Personally I spare no effort in striving to make my life free, just, and democratic. You are a new generation, you must cherish the past and usher in the future. You must be resolute in mind and dauntless in spirit, you must struggle for the good of humanity. This is my hope/expectation. Thank you!“

Videos from the concert:

Woven throughout this piece, and throughout much of the international discourse on China’s so-called domestic issues is the idea that Tibet, Taiwan, and sometimes Xinjiang all have something in common. On a basic level, this is true, however, if we hope to resolve any of these situations they cannot be treated as though they were the same. “Free Taiwan”, “Free Tibet”, and “Free Xinjiang/East Turkistan” are all quite nice sounding, and both the Dalai Lama and the performers at this event are clearly trying to link the struggles up with broad terms like “freedom” and “democracy”.

Unpopular as this idea is, we’ve said it before (although no one was reading this blog back then): an independent Tibet would be a disaster for the (common) Tibetan people right now. Here’s our imagining of what would happen if tomorrow, China handed Tibet over to the Dalai Lama to run as an independent nation:

The Dalai Lama and the rest of the exile community would probably return. They would arrive to find a society greatly changed from the one they ruled over half a century ago, and a people who have had little contact with them for decades. They would also find strong racial tensions that did not exist in the 1950s, and that has frequently erupted into violence in the past. The embittered remnants of the former Tibetan provincial government would likely also remain, and possibly position themselves in the way of anyone attempting to commandeer their bureaucracy. It seems unlikely that the exile leaders would actually be able to run a modern nation on their own; but even if they were theoretically capable, what money would they use?

As mentioned above, Tibet’s economic output is insufficient to support the region. The removal of all Beijing’s political infastructure would undoubtedly weaken Tibet’s economy further, leaving the new “nation” in the hands of an inexperienced relgious sect with little governing experience and no money.

Tibet would have almost no hope of finding support from other nations, either. China would certainly never [actively] support an independent Tibet, and other nations would also refuse support for fear of angering China and harming trade relations.

There seems very little reason to speculate that a “Free Tibet” wouldn’t quickly devolve into some third-world hellhole, complete with all the starvation and social instability that comes along with that title. At the end of the day, protesters calling for a Free Tibet must ask themselves what, exactly, it is that they want, and who they want it for.

Taiwan, of course, is a different story, and one that I don’t want to get into here because I feel ill-equipped to analyze that situation. The point here is that having a thousand people chant “Free Tibet!” and make the “T” sign is fun, but ultimately pretty meaningless. The situation is not going to be resolved, improved, or even productively influenced by black-and-white rhetoric that fails to take any shades of gray into account — and this applies to the Chinese government’s side of the story, too. As long as they continue to ignore the protests of ethnic Tibetans and paint the province as a racially harmonious utopia instead of genuinely addressing the problems there, unrest is going to continue.

Just the same, as long as the Tibetan exile community and international human rights groups keep demanding unconditional independence with no room for considering the actual situation on the ground, no progress is going to be made.

Same as it ever was.

In an interview with a German newspaper, the exiled Tibetan leader said of the upcoming anniversary, “I am very worried. Many Chinese citizens have armed themselves, and they are ready to shoot. It is a very tense situation. At any moment there could be an explosion of violence.”

As Fool’s Mountain has already pointed out, the idea that Chinese citizens are stockpiling firearms is a bit hard to swallow, although the Dalai Lama’s fears of violence are clearly still valid given last year’s…events.

Were they riots? Were they a government crackdown on peaceful protests? The Dalai Lama offers an intriguing third option, buried in the German original interview but unearthed by Fool’s Mountain with the help of Google’s webpage translator. Given the unreliability of such translation, I hope a more legitimate translation of the interview will come soon, but even from the robot translation, he appears to be offering a rather unique interpretation of the events of last March:

Let’s look back again to March last year: When the demonstrations were peaceful, the Chinese media did not report about them. Suddenly, on March 14, Chinese houses were set on fire and some Tibetans threw stones. But the Chinese army did not intervene at first, even though they had surrounded the quarter. Do you know why? They had staged these riots and sent the pictures of them around the world.

We have reports from eye witnesses. On March 12 and 13, they have seen Chinese trucks transporting people who were apparently Tibetans, but who were unknown to anybody. They were brought to Lhasa. Some hours later they could be seen setting buildings on fire. The Chinese want crises for which they can blame the Tibetans.

Were the riots staged? Is the Chinese population of Tibet armed with guns, awaiting this sensitive anniversary? We can hope that time will tell, but if the past is any indication, when it comes to Tibet, things only ever get less clear.

[Housekeeping note: In the interest of clarity, we’ve spelled out our commenting policy on this page. Essentially it boils down to “don’t be a dick”, but if you really want to read it, there it is.]