Last night I got an email from Rachel Beitarie, journalist and blogger at Bendi Laowai. Because I don’t know anything more about the situation than what she sent in her email, I’m going to post most of it verbatim here:

I took the attached photos this afternoon near the entrance to old town in Lijiang, Yunnan province. It’s a street very busy with traffic and pedestrians, mainly tourists.

This boy is a contortionist beggar, doing some rather appalling and dangerous spins. We couldn’t see where the person handling him was.

Talked to the kid briefly: said his parents were home in Henan, he is seven years old and got to Lijiang all by himself (which is almost certainly a lie) he said he’s only got here yesterday and people who pass this street everyday confirmed he’d only arrived recently. I’m not sure I can place his accent accurately as Henanese but think he’s from somewhere in the North, definitely not from Yunnan or Sichuan.

This is all we know. There are several other kids around doing the same thing. One of them is older and has been here several years (that one has two broken legs and wouldn’t let me take a photo of him). Some locals said they have contacted the police and the mayor’s office but nothing was done about this.

So if you can think of a way to help identifying and helping this kid and other like him please do so: add few words in Chinese, post this or send to more friends in the media or the blogsphere or anything else that you think might be helpful in making noise and shaking some government or police butts. 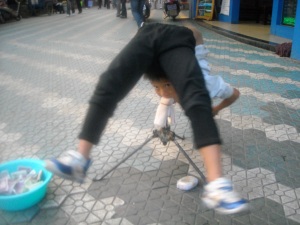 And while you’re making noise about this, don’t forget that sadly, it isn’t just a local issue. Child beggars are everywhere, and it’s not uncommon to find them with no adults in sight. A few weeks ago, I myself ran across a girl begging in the Chaoyangmen subway station in Beijing who could not have been older than 5. She was not accompanied by any adults, although thankfully a caring passer-by had stopped and was trying to figure out where she was from and where her parents were.

This is something the police and the government should be paying attention to. Of course, the chengguan are happy to kick these people off the streets whenever they find them, but I get the feeling no one looks much deeper into the situation. Rachel’s email seems to confirm that plenty of people know about these kids, but no one really seems to care.