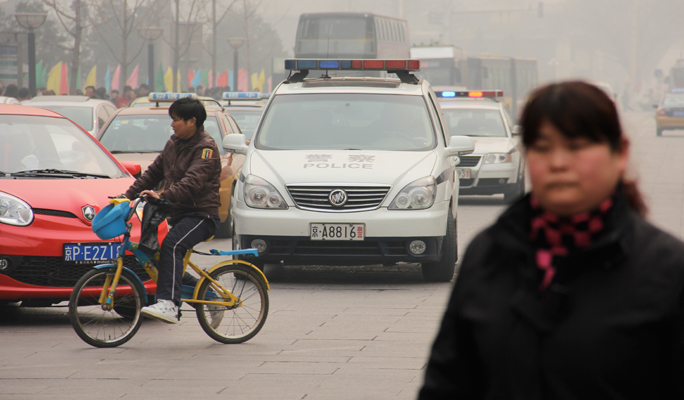 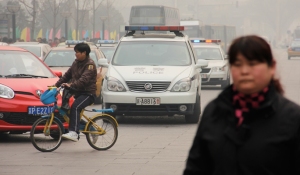 Late last night, I noticed that calls for large protests in several major Chinese cities were circulating on Twitter. Using the hashtag #cn220, users were reposting information from the overseas Chinese website Boxun, where an anonymous user had called for a Chinese “Jasmine Revolution.” This morning, those reports were mixed with reports that police and the military had already begun to form up in the locations designated for protest around the country. Naturally, I decided it would be a good idea to grab a camera and head to the Wangfujing area, where Beijing’s protest was supposed to happen.

I should note that I didn’t actually expect to find much. This news was being passed around almost exclusively on websites blocked in China, and many of the people making tweets seemed to be making them from outside China. There were people announcing that China’s jasmine revolution had begun at 11 in the morning, three hours before the protests were even supposed to start. But very few Chinese people had even heard about it, and many of the Chinese twitter users I follow said they had already been threatened, detained, or otherwise instructed not to go by police or Party authorities. 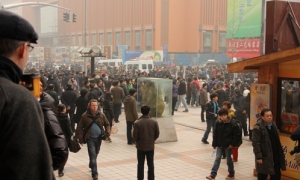 When we arrived, around 1:40, there was already a small group of people clustered around the entrance to McDonalds, the area designated online as the center of the protest. Most of them were carrying expensive photo or video cameras, and it was clear that a good percentage of the crowd was journalists.

I met up with a couple foreign correspondents I happen to know who had arrived slightly before me. We joked for a little whole about the “revolutionary” atmosphere, or lack thereof, and the ridiculousness of the growing crowd of people, photographing itself. Of course, we were also participants.

A little after 2pm, the crowd reached its largest, perhaps two or three hundred people, although there were people coming and leaving all the time because Wangfujing is naturally a fairly busy place. Aside from one moment, where we could see a bouquet of flowers fly above the heads of the center of the crowd–perhaps they were jasmine flowers?–I saw nothing at any point that could be considered protesting. No one shouted slogans, no one held signs, it was just a group of people standing around photographing each other.

Of course, the crowd drew an increasingly heavy police presence, and they herded people around the area for more than an hour before managing to more or less clear the place out. At one point, they drove everyone from in front of the McDonalds, so the crowd moved along the building’s side, blocking the road there, at which point the police herded everyone back in front of the McDonalds.

For the most part, the police showed surprising restraint, at least for Chinese cops. I saw no incidents of violence, although I did overhear an argument between a citizen and a police officer who had confiscated the man’s cell phone, and I did personally get into a shouting match with a police officer who shoved me. There were other reports of roughhousing, but nothing more than a bit of shoving and pushing.

After an hour or so, we left. There were still some people hanging around, but it was clear that everyone was waiting to see what would happen and no one was going to actually do anything. Even the police were getting bored. As we left, we passed a large group of them and overheard their commander say “Back to normal!” As we walked down the stairs and into the subway station, they piled into their vans and began to drive away.

It’s clear that if change will come to China, it will come from within. A revolution cannot be hoped or tweeted into existence by overseas Chinese, or overzealous Twitter fans drunk off their so-called victories in North Africa.

As a side note, I continue to marvel at the Beijing police’s ability to take nothing and turn it into an incident. Had they not come out in such large numbers and not tried to force people to leave, I suspect this would have been an even smaller “protest”.

0 thoughts on “The Revolution That Wasn’t”