Han Han’s new literary magazine, 《独唱团》, has been out for nearly a month now. There’s been plenty of buzz, especially given the official media instructions not to publish stories about it. The Global Times, for example, ran only one piece, which focused mostly on criticism of the magazine, despite the fact that the critics they were quoting hadn’t actually read the magazine.

Criticizing something you haven’t actually read is, of course, quite stupid. But are they right? Is 《独唱团》really just a collection of hoodlums writing pseudo-literature? The answer is complicated.

Of course, I need to preface anything I write here with a big disclaimer: I am not at all qualified to make any real literary criticism of Chinese work. I don’t have the sense of tone that a native reader would, and besides, there were plenty of words in 《独唱团》I’d never seen before. And I don’t know much about art or photography, either Given that, I approached the magazine like a casual reader rather than someone setting out to review it. If I wasn’t enjoying a piece, I stopped reading it. So take everything that follows with a bucket of salt. Or two.

The best pieces in 《独唱团》shine. The first piece, “Green Trains,” by Zhou Yunpeng, is a compelling and vivid collection of moments on trains from the blind author’s life. And “A Male Qiu Ju Story” — the title is a reference to Zhang Yimou’s film The Story of Qiu Ju — is an enthralling exposition of how much red tape one must plunge through to get what they are owed sometimes. There’s not much there one couldn’t get from the film, but it’s well written and the author insists that it’s a true story. There’s something to be said for that.

Not that all the true stories were good. “Motorcycle Diary”, for example, appears to be mostly a vehicle for the author to brag to the masses about his immense wealth. Congratulations, buddy. You own some cars. Get over yourself.

The essays of the magazine fared less well than the stories, though I did enjoy “Where is the dirt in dirty words,” a rather tongue-in-cheek analysis of the unique ways that curses are constructed in colloquial Chinese speech. But several others bored me to the extent that I stopped reading halfway through.

The magazine’s most interesting conceit is a long piece called “Everyone asking everyone” that is exactly what it sounds like, random people asking questions of other random people. Questions vary wildly from the political and the literary to the intimately personal — the magazine features one annoyed girlfriend asking her beau when he’s finally going to marry her. “When we have money,” he said. “And next time, we can just talk about this between the two of us, there’s no need to have some magazine representing and asking the question for you.” The political questions tend to go nowhere, as the “answers” are usually prefab rejection letters from whichever political institution is being questioned. As far as politics go, the magazine is pretty tame when compared to Han Han’s blog. (Compared to some of the things Ai Weiwei says, it might as well be the People’s Daily).

If anybody “won” 《独唱团》 it’s the photographers, whose work is almost all excellent. Ai Weiwei’s x-ray of his brain is in there — a piece we posted way back when it was medical documentation and not art — but better work comes from others. Yan Ming’s photo essay “My Wharf” starts with a striking shot of a man wading out into the misty gray of open water, his gaze and his swim trunks both fixed higher than one would expect (see photograph above). 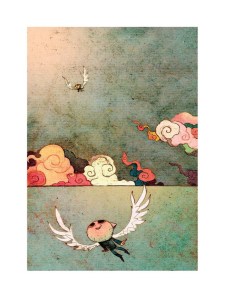 The other art is mostly interesting too, although one of the comics (“Milk Rivulet”) is pretty juvenile. The magazine is closed out by a graphic short called “The Darkness Outside Night” that paints a simple but tragic story with evocative watercolor textures that recall more traditional Chinese painting styles without aping them. The first frame of the story is beautiful enough that I would buy a large poster of it and have it framed if I could (see image at left).

I have, until now, ignored the reason anyone read this magazine in the first place. It is, after all, Han Han behind the wheel. How does his piece, “I want to chat with society”, hold up?

Badly. We have mentioned the sexism that occasionally plagues Han Han’s writing before, but it comes into sharp focus in his full length piece for 《独唱团》. In it, Han Han describes an encounter with a prostitute named Shan Shan. Her appearance is “very average”, but he lets her into his hotel room because the door doesn’t have a peephole and he’s feeling adventurous (generally, he says, he always checks first because what if he opens the door and there is “a pig” standing there?). Of course, he fucks her, but one gets the impression he’s doing the whole thing ironically — using her on multiple levels at the same time. Later, he asks her to stand in front of the light coming in from a window so that he can sleep, and when she springs into action, he thinks to himself, “this whore will do anything for money.” Later, she tells him she’s only willing to do anything because she is pregnant, doesn’t know who the father is, and needs to save money to raise the child. Immediately Han Han tells her to stop standing and get some rest. What a hero! No, wait, I meant the other thing. Jackass.

Granted, it’s fiction (one hopes), and the story goes on from there, but there are similar strains in his introduction to the magazine, where he writes “…so that’s what the world is like; men change the world, and women change men’s viewpoints.” The poor guy just can’t help himself. We’ve seen hints of it before, but as they begin to pile up, will his female fan base begin to erode?

Probably not. The man is young, rich, attractive, and he drives race cars.

Still, his piece was enough to put me off of the whole magazine a bit. I’ll buy the next issue when it comes out — if it’s anything like this one, we can expect it sometime in the fall of 2011 — and I’m sure it will be good. Just like this issue. Good, but not great. Here’s hoping that Han Han finds the right woman between now and then, and that she smacks some sense into him.

After all, isn’t that what Shanghai women do best?