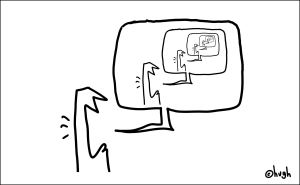 Twitter is a wonderful thing. It has revolutionized the way people communicate and it has given Chinese netizens a completely uncensored playground to air their grievances, provided they can find a way to vault over the Great Firewall. I have speculated before that the whole thing is a bit dangerous, given that the government can still see what dissidents are writing on Twitter, and what’s more, can see who is following them and who they follow. It’s a veritable who’s who of Chinese dissidents, laid out for government agents on a pretty blue background.

But there may be a bigger issue. Twitter, by definition, requires brevity and defies analysis or in-depth discussion. It is, therefore, great for spreading news — when Google goes down, everyone knows within a couple hours — but not so great for exchanging views. Observe the following exchange I encountered on Twitter a few days ago (each tweet is in response to the previous one, and be warned there is some explicit language):

Liu Brothers: Do you hope that the future China will be a FLG-controlled fundamentalist state?
Lihlii: F*ck your mother’s c*nt.
Aiww [Ai Weiwei]: Hahaha
Liu Brothers: F*ck, even “Lord Ai” believes in the wheel?

Obviously, not everything one says need be important or even mature, but still, this reads like the sort of “political discussion” teenagers have over the six pack they stole out of dad’s fridge. And it’s not entirely uncommon. I wonder if in some ways, Twitter isn’t creating a sort of echo chamber for Chinese dissidents — a place where their claims are never really challenged and their proclamations, no matter how uselessly profane and banal, get retweeted by an army of dedicated followers.

Now, admittedly, I’m being a bit unfair here, especially in cutting that conversation off where I did, as there was eventually a slightly more civil “discussion” — so much as there can be such a thing on Twitter — on the truth/lies surrounding FLG. Being neither interested in the topic nor interested in getting this site GFW’ed, I’m not going to translate any of that. But it really does seem as though there’s more yelling going on every time I check my Twitter updates, and my concern is that Chinese Twitter, as a self-selecting community of GFW jumpers, is becoming a dissident echo chamber and yet another bastion of polarized “everything-the-other-side-says-is-evil” thought. And we’ve seen how well massive political polarization is working for the US.

China’s fifty cent party members and “angry youth” are already polarized. If the “free-thinker” dissident community falls into the same trap, what hope can there be of any kind of productive discussion or development?

0 thoughts on “Twitter and the Big, Stupid Echo Chamber”